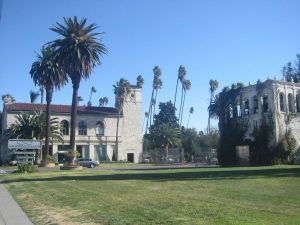 This is the final resting place for many famous celebrities. Among the most famous is the voice of Looney Toons, Mel Blanc. Many people are buried here. This means that there are many visitors both family and those who want to see the graves of their favorite celebrities. However, during visits, it may be more than you bargain for. This cemetery is haunted. One of the most common encounters is a woman crying on the lake that is located on the same grounds as the cemetery. Many people claim that this woman is an actress who had died back in 1921. The death of this actress was said to be linked to another actor. No matter what the case is or who it is, there is some paranormal activity occurring in this cemetery.

What is the Hollywood Forever Cemetery? 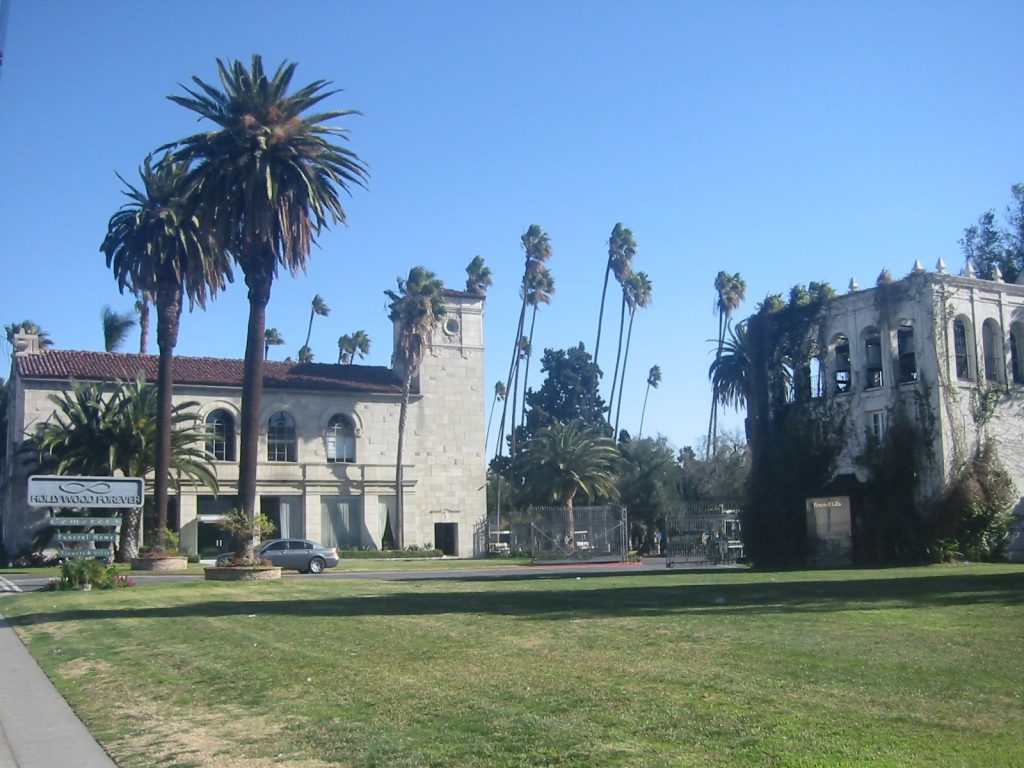 The Hollywood Forever Cemetery is one of the oldest in the state of California. It is located on Santa Monica Blvd. Many famous individuals are buried in this cemetery. On the same block, Paramount Pictures can be located. This is still an active cemetery and funeral home to this day. It was first used in 1899. It features well over fifty acres of land for families and visitors. There are still thousands of spaces available and new mausoleums being completed. In fact, this cemetery is more active than it ever has been before and we aren’t just talking about the new arrivals either.

The cemetery has been restored to its original beautiful scene. Today this cemetery offers tours and you can purchase maps to see who is buried where. However, you do not need to take a tour, simply purchase a map and go on your way. You may find more than just some tombstones too! There are reportedly many paranormal sightings within the cemetery. Visitors will often state they hear sobbing or cold spots throughout the cemetery.

This cemetery was named Hollywood Memorial Park before it was known as Hollywood Forever Cemetery. It was opened to the public back in 1899. However, in the 1980s and 1990s, skullduggery and mismanagement from Jules Roth had turned this place into a nightmare. The property was so bad that people had paid to get their loved ones removed from their graves or crypts. It was after that fact that Tyler Cassity had taken over and spent millions to renovate. When Tyler purchased this land, he renamed it the Hollywood Forever Cemetery which has stuck to this day. The name has been there for years and will remain the same for many years to come.

There are said to be three different figures or entities that lurk the ground of the cemetery. There is also said that there are numerous entities that wander around the edges to spook the other properties. Paramount Studios is located in very close proximity to this cemetery and it is said to be one of the most haunted movie studios in the area. If the stories are true, this means that the figures will walk through the wall of the studio from the cemetery. It was reported that the studio has seen people or spirits that have been wearing 30s and 40s attire. Many people report hearing footsteps and having their equipment turned on or off.

The cemetery has seen many grave robbers, natural disasters, and scandals. However, the famous that are buried there refuse to give up the spotlight they have earned. Many men and women who are buried here have made themselves known in one way or another. However, with that said, three individuals have been making their appearance known for many years and probably many more to come. 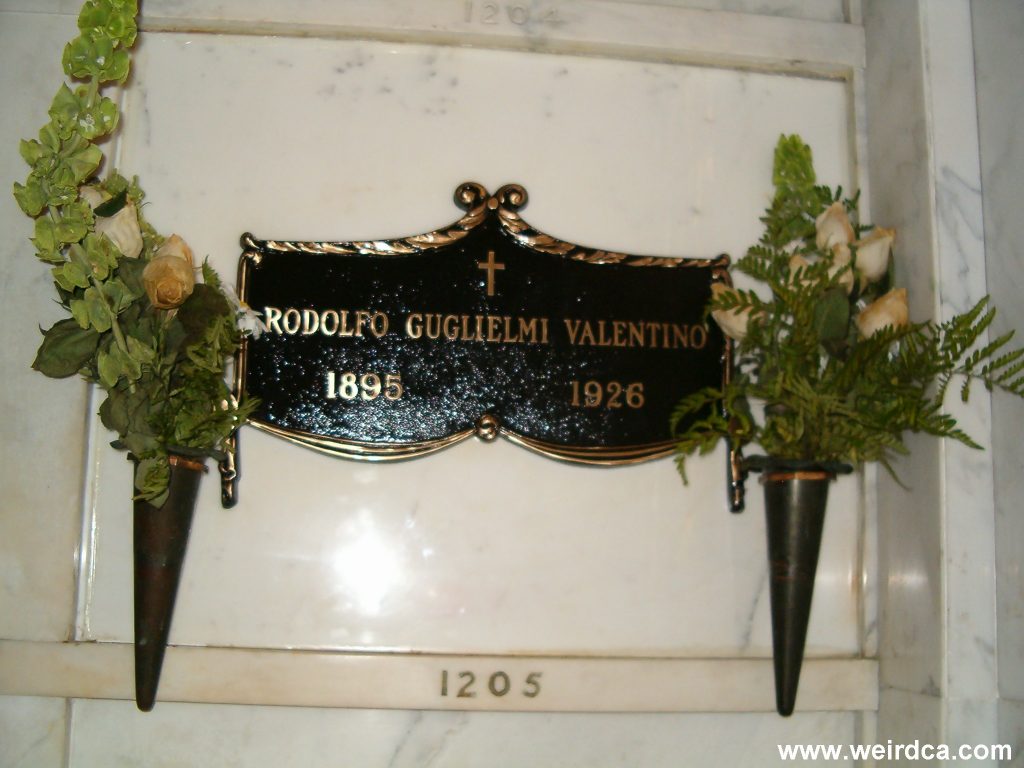 Many ghosts are said to reside in the cemetery; however, Rudolph Valentino isn’t one of them. A woman who appears in all black brings him flowers. Rudolph had passed away at the age of 31. He passed away in 1926 after surgery from an ulcer. Over 100,000 people gathered outside the funeral home. There were rumors that a wax mold replica was used to protect the body at the service. Valentino was brought to the Hollywood Forever Cemetery and was placed in a temporary spot located inside the Cathedral Mausoleum. He was in the second hallway on the left. The spot was supposed to be temporary because a memorial was supposed to be built with life-size statues of himself. However, the temporary spot had come from a dear friend who had owned two plots next to each other. However, the same year, she suffered a heart attack and passed away. She now lies next to him. The family of Valentino had purchased a crypt for the widow of the dear friend. This temporary home turned into a permanent one.

It wasn’t until after he had been laid to rest that the woman in black had begun to appear. She would appear on the anniversary of his death. She was dressed from head to toe in black. This included a veil. She would leave roses on the grave. She was thought to be Pola Negri, the woman he was engaged to during the time of his death. Many women have come forward claiming they are the woman in black, however, none of these claims have turned out to be true.

This is a man who had passed away in 1966. He was in three different movies and he haunts the Psalms and Abbey mausoleum. People have heard whispering voices, strange lights, cold air, drafts, and cologne coming from the mausoleum or inside the mausoleum. Not only does this man haunt the gravesite, but he also haunts his old house as well.

Virginia had attended a party in 1921 on Labor Day. It was held at the Saint Francis Hotel. This was a celebration for Roscoe Arbuckle. He had acquired a contract and the party was to celebrate his success. However, at this party, Virginia had become sick. She was so ill that an ambulance was needed to get her. She died just a few short days later at the young age of 26. Many claims were made surrounding her death. Many claimed that Arbuckle had raped Virginia. Eventually, Arbuckle was not guilty however, because of this, his career had suffered. Around the site of Virginia’s grave, you will notice an icy cold feeling. People have also heard what appears to be sobbing. Many believe that she is still dealing with this traumatic event. No one knows exactly what happened to Virginia on that fateful Labor Day, however, many people suspect that Arbuckle had something to do with her death. No one knows why she lurks in the cemetery but many visitors have stated they can clearly see her weeping on the edge of the water that is located on the grounds.

While many people come and go from the cemetery, most report experiencing some type of paranormal activity. Some people do not know if the activity was paranormal but they simply have no explanation for it. There are many occurrences where people have stated they have seen one entity or another. It is a beautiful place to visit and see your favorite actresses or actor’s burial place, but don’t be freaked out if they are still in the limelight. Many of the people buried here are still putting on a show for the visitors. Whether it be Virgina Rappe or one of the many other entities, you are sure to encounter beauty and some strange occurrences. There is no need to worry however, there has been nothing reported as dangerous or harmful. These entities stay to themselves and simply go about what they need to do. No one will attack or harm you during your visit to the cemetery.