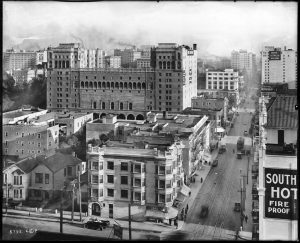 For decades, the city of Los Angeles has prevailed as the motion picture epicenter of the world. Since the 1920s, the beautiful, the rich, and the famous have flocked to its sparkling skyline and stayed in its luxurious hotels. The Knickerbocker Hollywood Hotel was once among the most popular of these and boasted an impressive guest list of Hollywood elite during its heyday in the 1930s and 40s. But as Hollywood Boulevard began to decline in quality and popularity, it dragged the Knickerbocker down with it. The area surrounding the once-great hotel became seedier and seedier until finally the building was sold in 1972 and remodeled into apartments for LA’s senior citizens. Although living movie stars no longer walk its halls, many believe the Knickerbocker Hotel to be haunted by the ghosts of Hollywood’s past.

Standing outside of the nondescript gray building, you would never guess that legends like Marilyn Monroe, Maureen O’Sullivan, and Elvis Presley once slept here. Today, it’s home to less glamorous, and much older residents. If you were to sit in the lobby, you could watch them shuffle in and out, going about their day, perhaps completely unaware of the building’s place in Hollywood history. If you looked up, you’d notice a massive art deco chandelier hanging from the ceiling, the only remaining relic of the Knickbocker’s dazzling past. It looks oddly out of place amongst the dingy, dated furniture. But if we focus on just the chandelier, and none of its surroundings, we can take a trip back through time.

By the 1920s, Hollywood had blossomed into a bustling metropolis boasting a number of swanky hotels and high-rises. In July of 1929, the Knickerbocker and its adjacent nightclub the Lido Room joined their ranks, quickly becoming a favorite spot for actors, producers, and directors of the budding film industry.

In the decade that followed, the hotel’s popularity continued to grow, and silver starlets like Maureen O’Sullivan took up permanent residences on the upper floors. On the floors below, there was always something happening, from Hollywood film moguls celebrating their success in the banquet hall to string quartets and dancers performing all night at the Lido Room. Actress Betty Grable once hosted a party at the Knickerbocker for fellow star Jackie Coogan’s 21st birthday, with Johnny Mercer and the legendary Lucille Ball in attendance. Along with some of the brightest stars of its day, the hotel also boasted guests of extreme athletic ability. During the 1932 Olympic games, the hotel housed Danish and Indian delegation events.

Celebrities and athletes aside, the hotel hosted a crowd of a much different sort when the Pacific Coast Association of Magicians decided to hold their annual convention there in 1935. Bess Houdini, the wife of the late Harry Houdini, was famously in attendance. Performances that day included a blindfolded car race and a magician escaping from a straitjacket while hanging upside down from the balcony. The convention was so wildly popular that a year later Bess Houdini decided to hold her late husband’s annual séance at the Knickerbocker. Houdini was a no-show, but the event was a massive success nonetheless.

As the 1940s approached, the hotel became a favorite haunt of Hollywood legend D.W. Griffith. Old and out of work, the aged director mostly kept to himself, spending most of his time absorbed in his books. Hundreds of young guests must have passed through the hotel during his stay, completely unaware they were sharing space with a titan of the industry. In the evenings Griffith would sometimes wander down into the lobby with his cane, or stroll down Hollywood Boulevard unrecognized. On July 23rd, 1938, Griffith was discovered unconscious in the lobby after suffering a massive stroke. He died on the way to the hospital.

As the Golden age of Hollywood reached its end in the 60s, the Knickerbocker’s splendor began to dwindle. Ironically enough, it was only once the hotel’s star had faded that some of its most famous guests booked their stays. Similar to the notorious Chateau Marmont, the Knickerbocker became a hideout for stars wanting to draw as little attention to themselves as possible. Among them was doomed couple Marilyn Monroe and Joe Dimaggio, who met at the hotel for clandestine dates. According to reports, the couple even spent their honeymoon at the Knickerbocker in January of 1954. Just two years later, Elvis Presley would stay at the hotel during the filming of 1956’s Love me Tender.

More: a complete history of the Knickerbocker Hotel

By the 1970s, the Knickerbocker’s number was up. Stars had long since stopped coming, and not even tourists wanted to stay at the shabby old building. In 1972, the hotel, once a hotspot for Hollywood youth, was converted into apartments for those aged 65 and up. But ever since the first batch of residents moved in, strange sightings have been reported at what was once the Knickerbocker Hollywood Hotel.

The run-down old building has no doubt seen better days, but more than a few of its former residents have stuck around, perhaps nostalgic for the glitz and glamor that once characterized it.

Undoubtedly one of the friendlier ghosts to pad down the halls of the haunted Knickerbocker Hotel is that of Speck, an English Setter dog. During the hotel’s heyday in the 1930s and 40s, Speck lived at the hotel with his master, hotel manager Jack Matthews. It was not uncommon for guests to see Speck making his way down the hall, and he often stopped to let small children pet him in the lobby. Speck could also be seen ringing the doorbell to his master’s office.

Even more impressive, Speck could ride up and down in the elevators on his own, using his paw to press the buttons. Ever the well-mannered dog, he was said to always let hotel patrons get on or off the elevator before him. According to reports, Speck is just as well-mannered in death as he was in life. Residents of the Knickerbocker have made reports over the years of an old English Setter dog riding the elevator with them, and others have spotted him striding down the hall or waiting obediently outside his master’s old door.

Speck isn’t the only long-term resident of the Knickerbocker to make a cameo. Legendary film director D.W. Griffith, who spent his last years at the hotel, has also been said to make frequent reappearances. Newer residents sometimes make reports of a strange, dapper-looking old man in dated clothing hanging out in the lobby, swinging his cane and humming to himself. When asked about the man’s identity, long-term employees used to his regular appearances usually advise them to ignore him. “That’s just old Mr. Griffith,” they say.

Perhaps most infamous of all to haunt the hotel halls is the ghost of Irene Gibbons. Of all the deaths to occur at the hotel, hers was undoubtedly the most violent, and perhaps the reason her spirit is rumored to lurk there to this day. In 1962, Irene checked into the Knickerbocker for the last time. A decade earlier, she had been a much sought-after costume designer and had dressed stars such as Marlene Dietrich, Ingrid Bergman, and her close friend Joan Crawford. But by the time the 60s rolled along, much like the Knickerbocker itself, her star had begun to fade. With the intention of ending her own life, Irene checked into the hotel. She drank herself nearly into oblivion, drafted a suicide note, then plummeted from the window to her death. Ever since that day, residents have reported an eerie chill permeating the room, and the odd, inexplicable urge to throw themselves from the window every time they walk by it.

Other residents have made startling reports of a middle-aged woman in odd clothing, her hair all in disarray, standing in one of the windowsills of the building. Sometimes, the apparition simply disappears, other times, the witnesses rush to the top floor to investigate, only to find no one there. But most upsetting of all, the figure of the woman is sometimes reported to leap from the window and crash onto the roof of the lobby below, where Irene Gibbons met her end nearly sixty years ago.

Though the Knickerbocker Hotel’s prime may have passed, the ghosts of the city’s sordid past still linger. And though you’re not likely to encounter the spirit of Harry Houdini, keep an eye out for apparitions of English Setters, suicidal costume designers, and the spirit of famed Hollywood director D.W. Griffith.