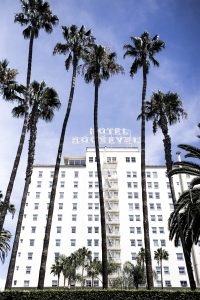 The Hollywood Roosevelt Hotel is a popular holiday destination known for Old Hollywood’s rich and famous intrigues. It offers not only cutting-edge facilities and historical features but also a luxurious experience that will take you back to Hollywood’s good old days.

But is the Roosevelt Hotel just a place for relaxation and glamour? Hotel employees and guests say there’s more to that. For decades now, the hotel has been the center of many ghost stories, most of them involving the spirits of Hollywood celebrities.

The Rise of a One-of-a-Kind Hollywood Icon

Thanks to a great group of investors, including Sid Grauman, Mary Pickford, and Douglas Fairbanks, the Hollywood Roosevelt Hotel came to life. It opened its doors on May 15, 1927, with numerous celebrities in attendance. Clara Bow, Gloria Swanson, Harold Lloyd, Charlie Chapin, and Will Rogers were there to join the opening festivities.

Hollywood Roosevelt Hotel is an opulent 12-story building with 300 guest rooms, including 63 suites and lots of offices and conference rooms. During that time, it cost $2.5 million to complete.

That was several decades ago, but even today, the structure boasts luxury. Stunningly painted ceilings. Marble columns. Wrought-iron chandeliers. Sumptuous fountains. It was a building designed to be of service to the wealthy and famous.

Its reputation as an iconic landmark was further sealed when it was chosen to be the venue of the first-ever Academy Awards in 1929. That was also the shortest Oscar event ever, lasting only five minutes.

Since then, the hotel has become a top choice for all kinds of social events. That includes tons of movie shoots and premieres involving big names in the film and entertainment industry.

However, in the 1950s, the Hollywood Roosevelt Hotel went into decline. Many parts of the building were demolished. Its elaborate ceilings were altered and were repainted seafoam green. The downward turn in its operations and reputation went on for years.

The hotel was almost torn down in the 1980s if it wasn’t for the help of the luxury hotel chain Radisson Hotels. Equipped with the hotel’s historic photographs and original blueprints, they implemented a $35 million project to restore the building to its former glory.

That renovation and restoration work resulted in the Hollywood Roosevelt Hotel we know today. A historic building filled with modern-day perks and amenities upper-income earners enjoy. Among the most recent additions is the multi-million dollar David Hockney painting at the bottom of Tropicana Pool. That mural is, in itself, considered an architectural wonder.

The Home of the Stars of the Yesteryears

The Hollywood Roosevelt Hotel was able to witness the highs and lows of many iconic stars. Some even started their careers within the walls of this historic structure.

Young Shirley Temple took her first-ever tap dancing lessons on the hotel’s stairway. Her teacher? None other than tap dancer, actor, and singer Bill Robinson, also the highest-paid African-American entertainer in the first half of the 20th century.

Actor Lew Ayres’ six-decade Hollywood career started at the Blossom Room when he asked an actress to dance with him. Luckily, his skills and charm caught the eye of her agent.

When English actor David Niven was first trying his luck in the entertainment industry, one of the hotel clerks felt sorry for him and allowed him to stay in a small room for free. He eventually reached his movie-star dreams and won an Academy Award for Best Actor for the 1958 film Separate Tables.

Sweethearts Clark Gable and Carole Lombard started their high-profile love affair at the ever famous Gable-Lombard Penthouse, a 1,200 square-foot outdoor space at the hotel’s rooftop. They used to stay in this place for five dollars a night, enjoying quality time together and the spectacular Hollywood Hills view.

Actor Montgomery Clift stayed in Room 928 for three months in 1952 while he was filming “From Here to Eternity.” This movie ultimately earned him his third Academy Award nomination for best actor. His stay in the hotel is one of the best moments of his life.

The room she stayed in is now called the Marilyn Suite, a 750-square-foot suite that features vintage furniture, sleek hardwood floor, and mid-century accents. It’s the hotel’s one of the most requested rooms for good reason.

Famous Guests From the Afterlife

Guests typically leave after a few days. However, some of them didn’t even after their death. Following the significant restoration work in 1984, spirits around the building became restless and active.

Apart from being a top holiday destination, the hotel now enjoys a ghostly reputation as a haunted location. Unseen beings are said to roam the building’s premises, unable to find closure and eternal peace.

Marilyn Monroe endured a loveless childhood and mental health issues, all while being the center of public attention. Sadly, she never got the help she needed. Instead, she turned to alcohol, drugs, and sex to chase all the emotional pain away.

People say that until today, her troubled, unhappy soul still roams her old suite 1200, as well as other parts of the hotel. The most notable apparitions involve a full-length mirror that used to be in her old suite. The sightings got so bad; the staff was forced to move the mirror in the hallway to avoid losing guests.

Her ghost has also been seen dancing in the Blossom Ballroom, the venue of the first-ever Academy Awards.

Montgomery Clift’s 1958 car accident marked the end of his career in the movie industry. He never completely recovered from the incident and turned to alcohol and drug abuse to make himself feel better. His drug use seriously affected his job as an actor, resulting in a life filled with career frustrations.

His restless spirit is said to wander in Room 928 and the 9th-floor hallway. Some maids have felt something cold brush by them while cleaning and have felt a presence walk beside them.

One of the most chilling experiences came from a guest. It happened one night while she was in bed reading, with her husband beside her. All of a sudden, someone patted her shoulder. Thinking it was her husband, she turned to talk to him but was so surprised to see him asleep.

Peter James, a psychic, also spent a night in Room 928 and saw Clift’s ghost sitting on a chair in one corner of the room. He watched his spirit for several minutes in that same spot until it disappeared.

Spirit of Caroline, a Five-Year-Old Girl

Caroline is the youngest among the hotel’s known spectral residents. She was first encountered by Peter James in the Academy Room back in 1992, but it was in the Penthouse Library when the psychic got to communicate with her. He saw her crying, so he asked what was wrong. She said she’s worried about her mom getting hurt. She simply disappeared when the psychic tried to comfort her.

Until today, Caroline still plays around and roams the hallways while looking for her mother. Guests and employees say that she looks like a real child, usually wearing a pink jacket and jeans. One of the receptionists who saw her thought she was alive as she skipped around the lobby, singing like an ordinary kid.

A male entity, possibly an actor back in the 1920s, graces the Blossom Ballroom while dressed in a tuxedo as if attending an event. According to psychics, he was an award nominee and an Oscar banquet attendee who is still very much attached to his career and dreams.

The Blossom Ballroom is a favorite spot of another male ghost in a tuxedo, this time a piano-playing one. Some guests were exploring the mezzanine area when they heard him playing the piano. When they looked over the balcony, they saw that he was wearing a white tuxedo. He disappeared moments after he was seen.

Unknown Entities by the Swimming Pool

Security personnel monitoring CCTV cameras have reported seeing a person swimming in the pool late at night or when the pool is closed for guests. But once they head over to the pool area, they realize that no one is there.

The Hollywood Roosevelt Hotel as a Playground for the Dead

It’s clear that strong emotional attachment keeps the spirits in the hotel, from a child looking for her mother and actor with career frustrations to a pop culture icon who succumbed to substance abuse and mental health problems. Some, though, seemed to stay because of wonderful memories. If you’re planning on staying there, even just for a night, you better be prepared. You’ll never know who you’ll meet.